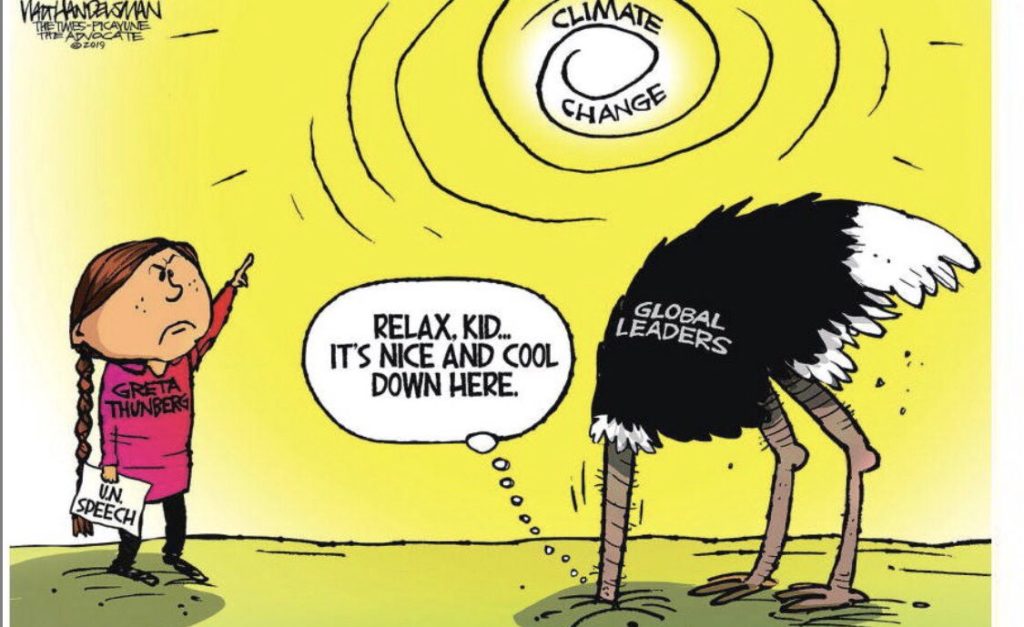 Everyone remembers “How Dare You” Greta, right? 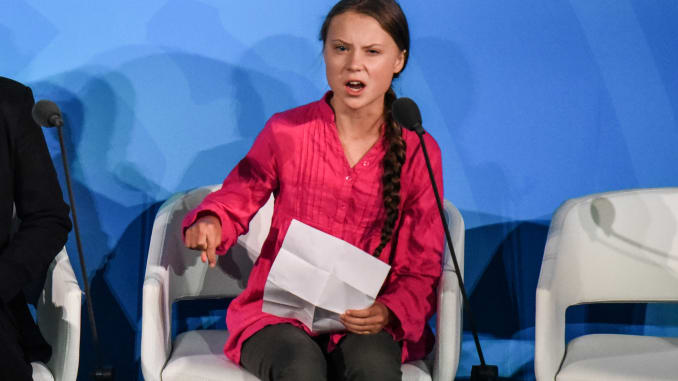 Okay, well, she recently tweeted this: 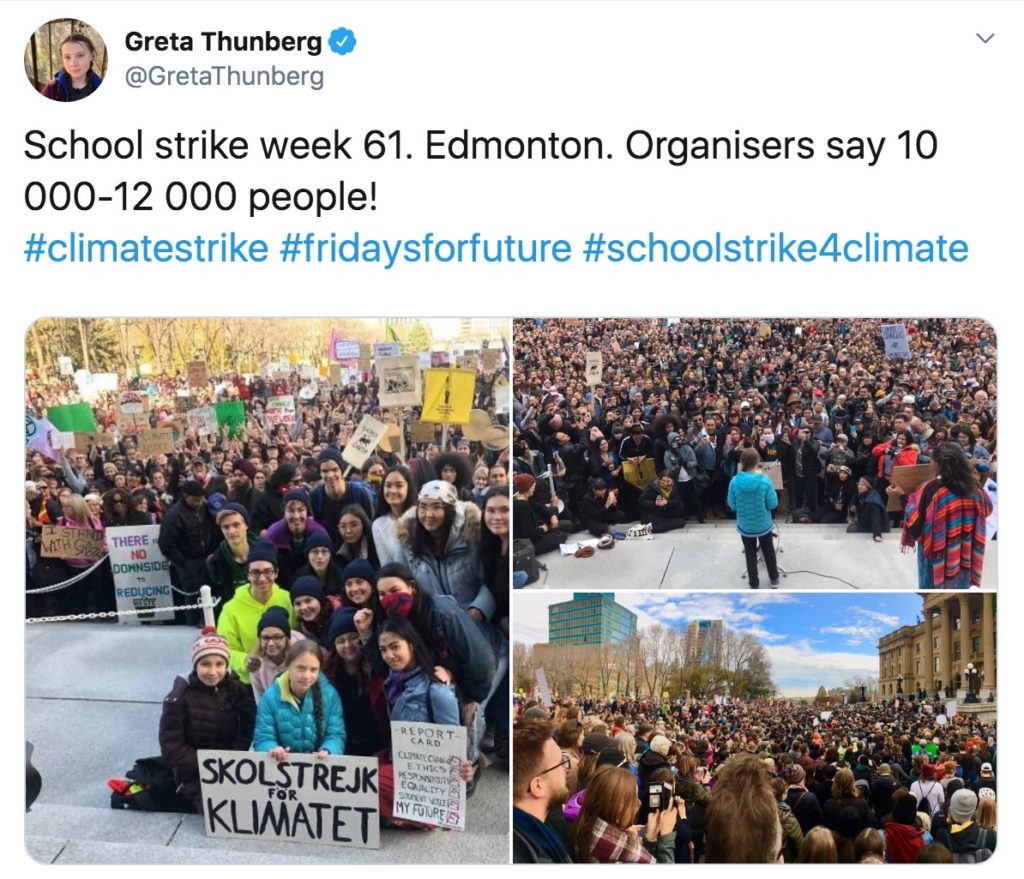 “School Strike week 61.” WEEK 61?! There are only 52 weeks in a year, and out of those 52, school is only in session for 36 weeks on average. That means that by week 72, these kids will have missed TWO YEARS of schooling.

This leads me to my next question: What happens next? These kids just aren’t going to go to school until lawmakers “fix the climate”? Will they be considered truant? Will they have to repeat this grade or the previous two grades? Skipping school in the name of a “good cause” is nice and all, but only for, like, 2 or 3 days maximum. This is getting ridiculous. Actually, it already was ridiculous when Greta spoke at the UN, so I guess this is becoming…absurd? Yeah, absurd.

You know what else is becoming absurd? Their protest signs! They just keep getting better and better (and by that I really mean worse and worse). 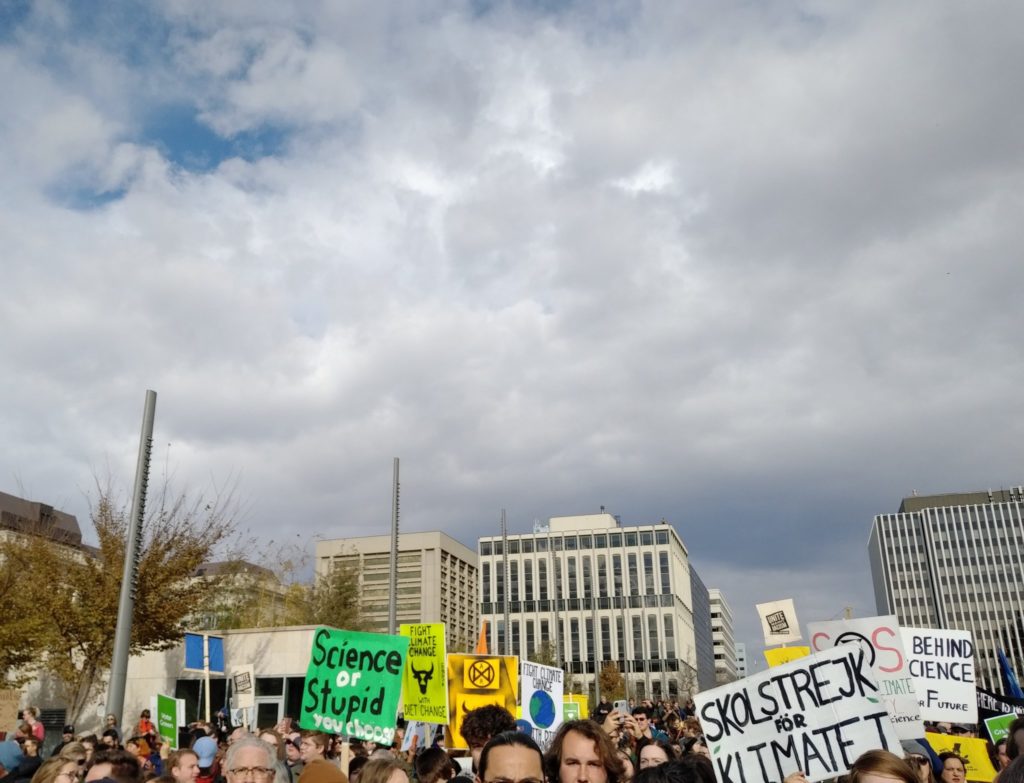 “Fight Climate Change with Diet Change”. How do they think that cow farts are making the climate worse, while also thinking that we need to stop eating beef?!

Also, “Science or Stupid – you choose”, the SCIENCE on Climate Change straight up says that we do not have a climate crisis currently. So, I guess you’re going with “stupid”? 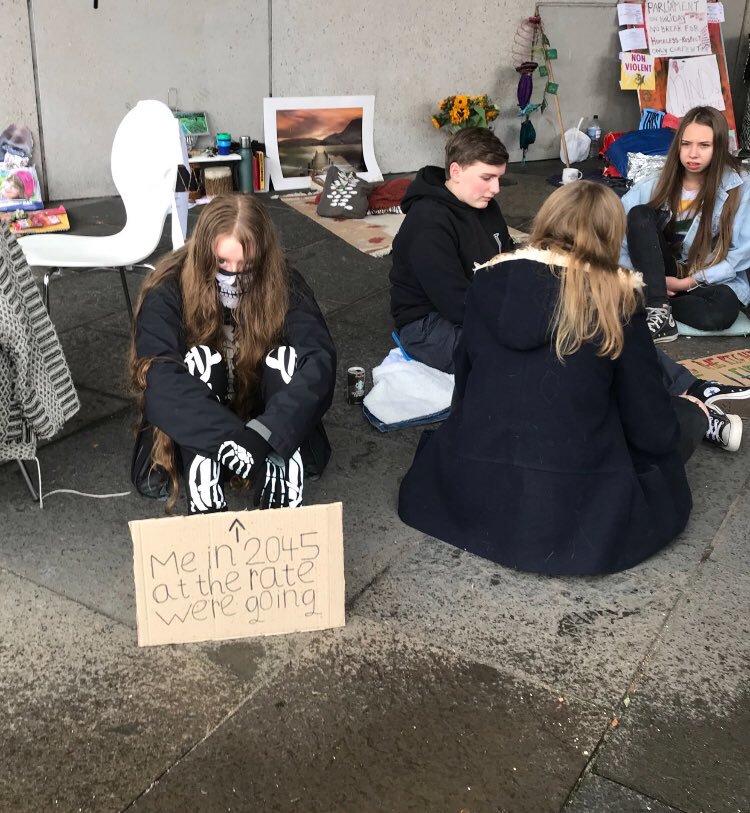 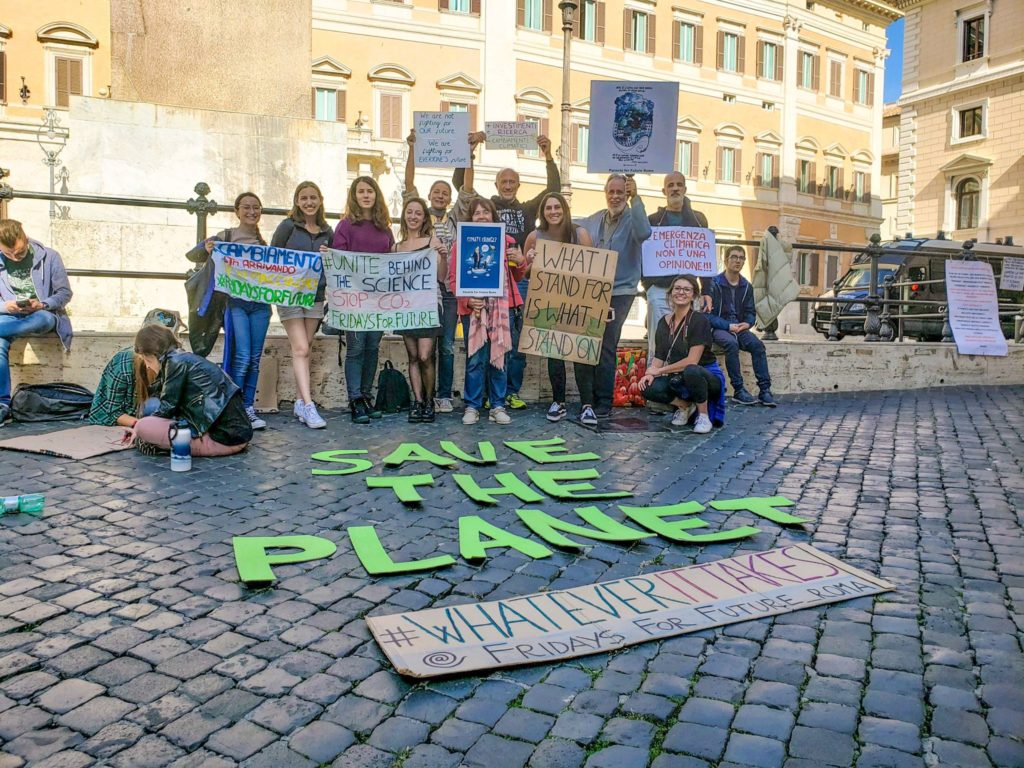 “#Unite behind the science, Stop CO2, Fridays for Future” – the SCIENCE says that we DO NOT have a climate crisis right now. 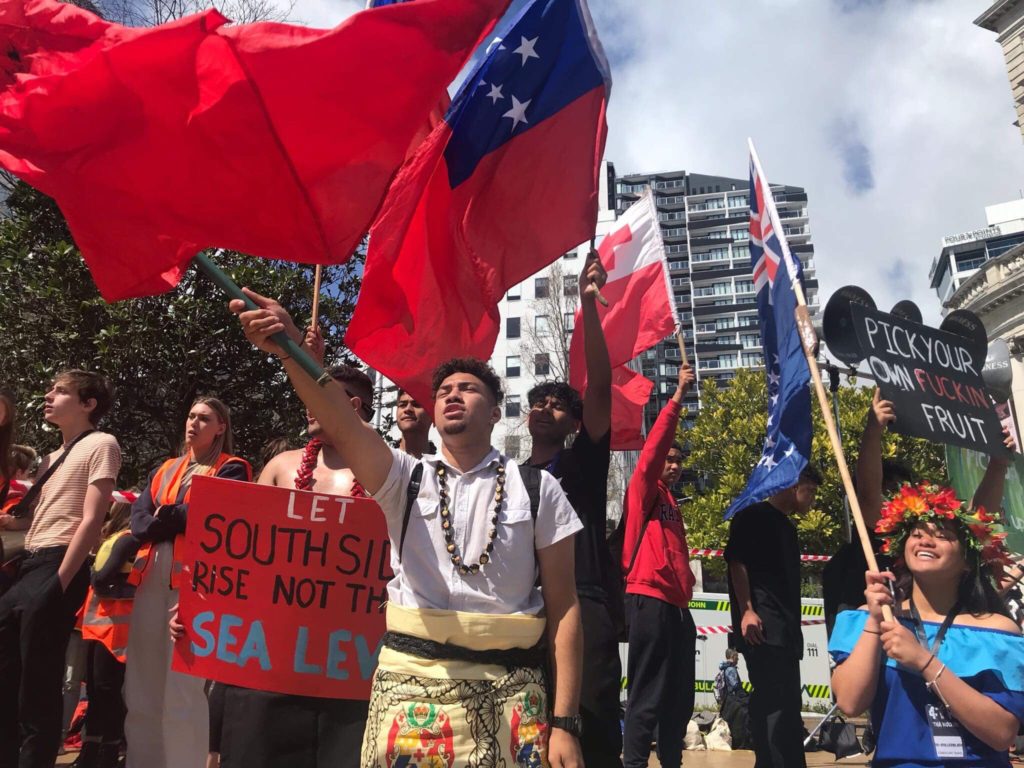 I don’t know what’s going on here purely because of the sign to the right that says, “PICK YOUR OWN FUCKIN’ FRUIT”. 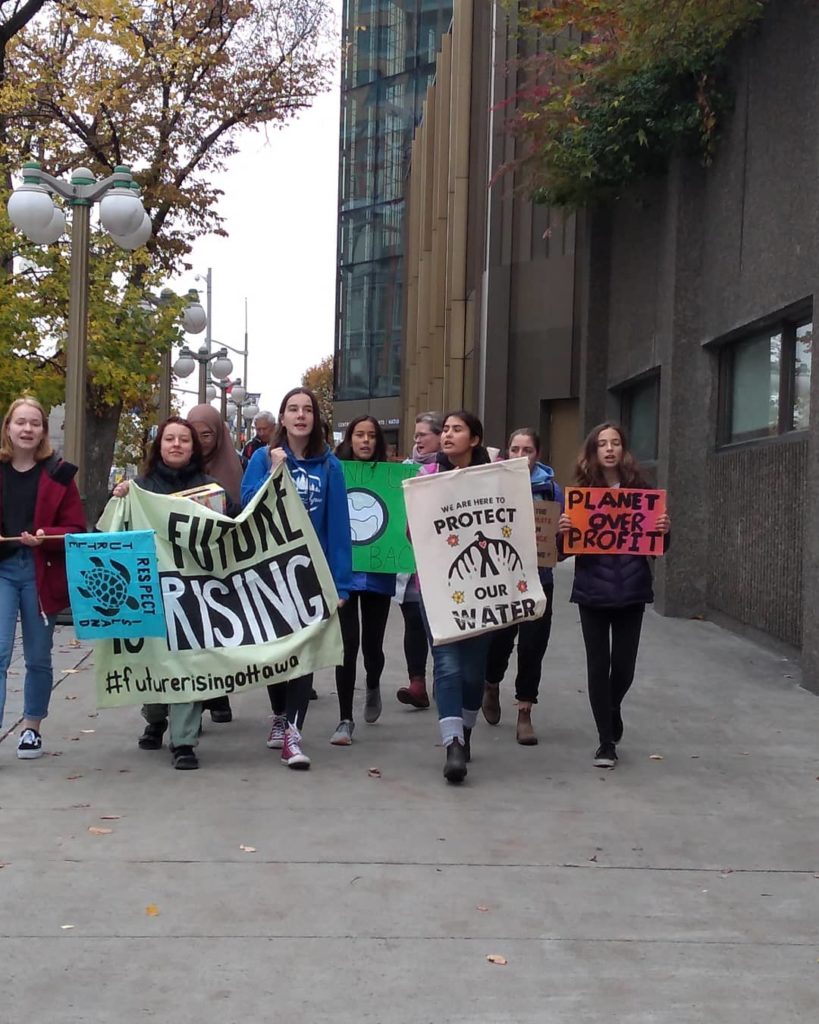 “Respect Turtle Island”, “Future Rising”, “We are here to PROTECT OUR WATER”, and “Planet over Profit”… There’s a lot going on here, and none of it makes sense. 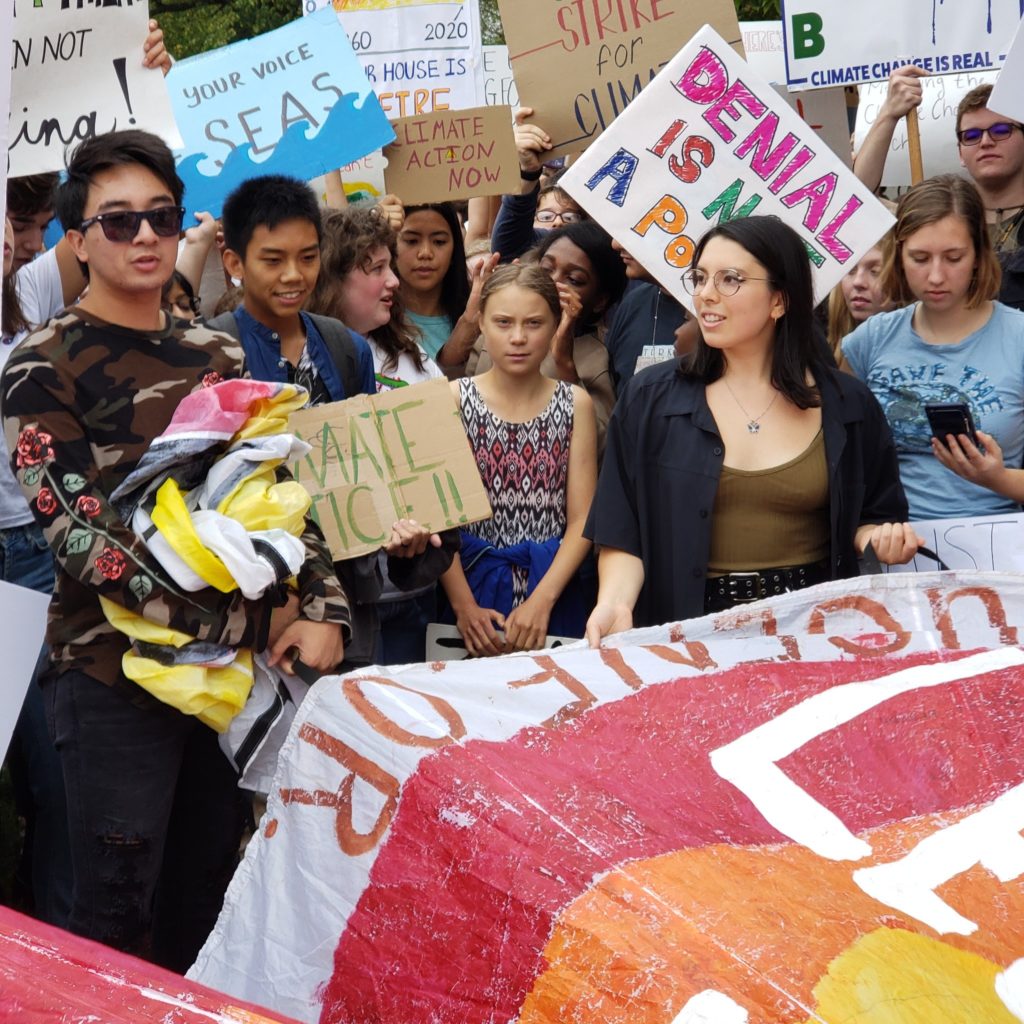 I just have to say that Greta looks like she snuck into some random extra-curricular club’s yearbook picture. 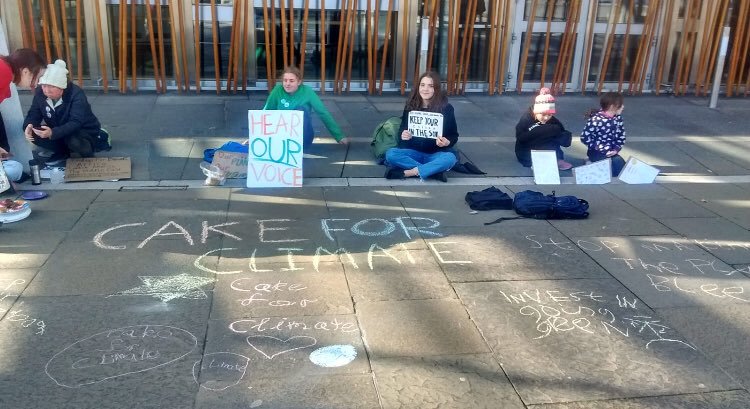 “Cake for Climate”??? Also, regarding the rest of the chalk writing.. these kids hardly know how to make letters. Get them back in school! 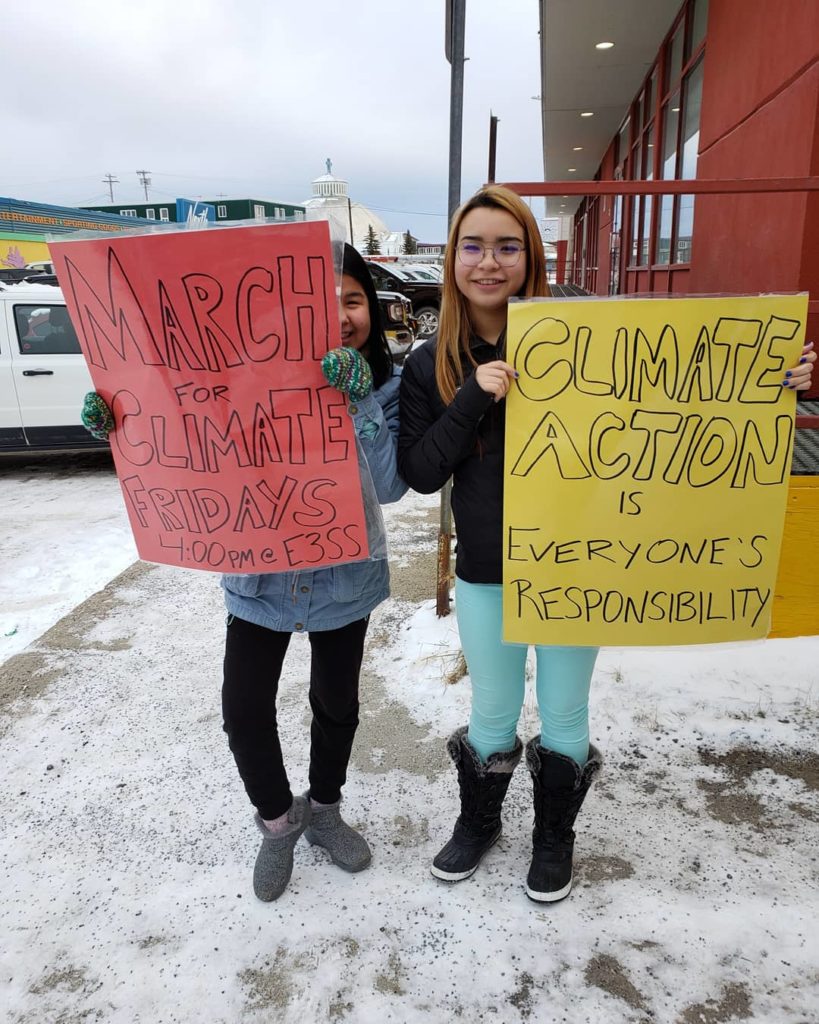 It’s clever that they laminated their signs to withstand all weather conditions – though two things stick out to me. 1) You just used MORE plastic to laminate your sign. 2) You’re standing in snow while trying to tell people that the planet is getting hotter and that all the ice is melting. 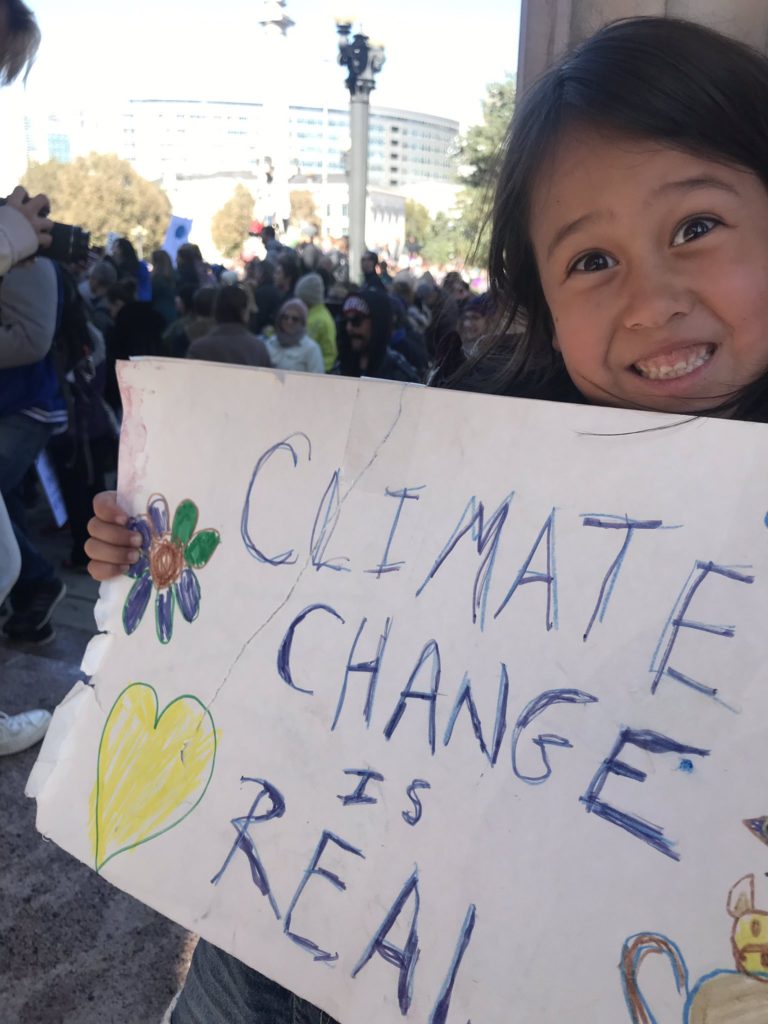 Okay, who let her trace their letters? We all know that her true marker-to-paper coordination is represented by the yellow filling of the green heart on the left. 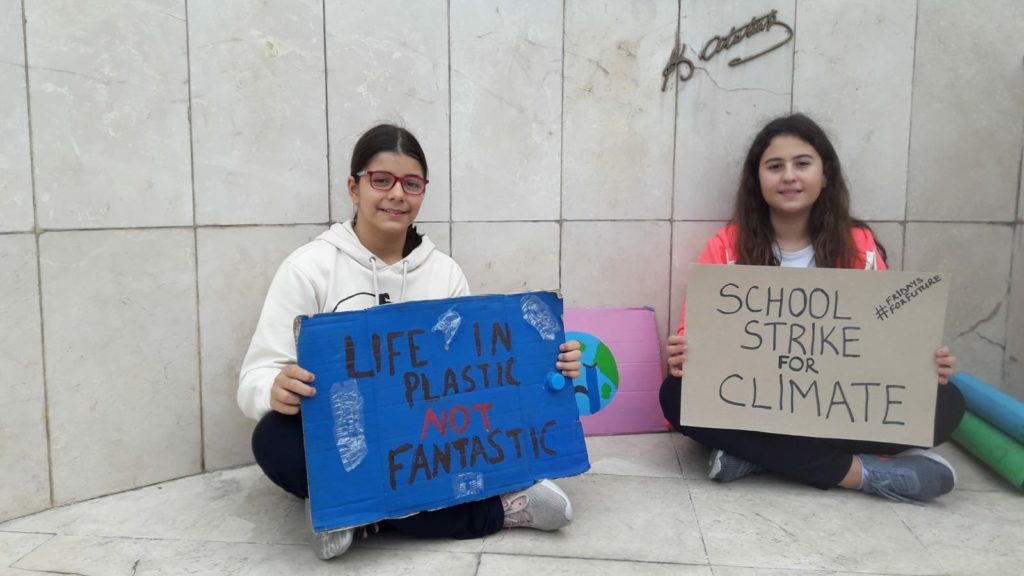 But… aren’t you wearing plastic-rimmed glasses? Is this just a lobby to get contacts instead? Oh wait..those are made of flexible PLASTICS too.. 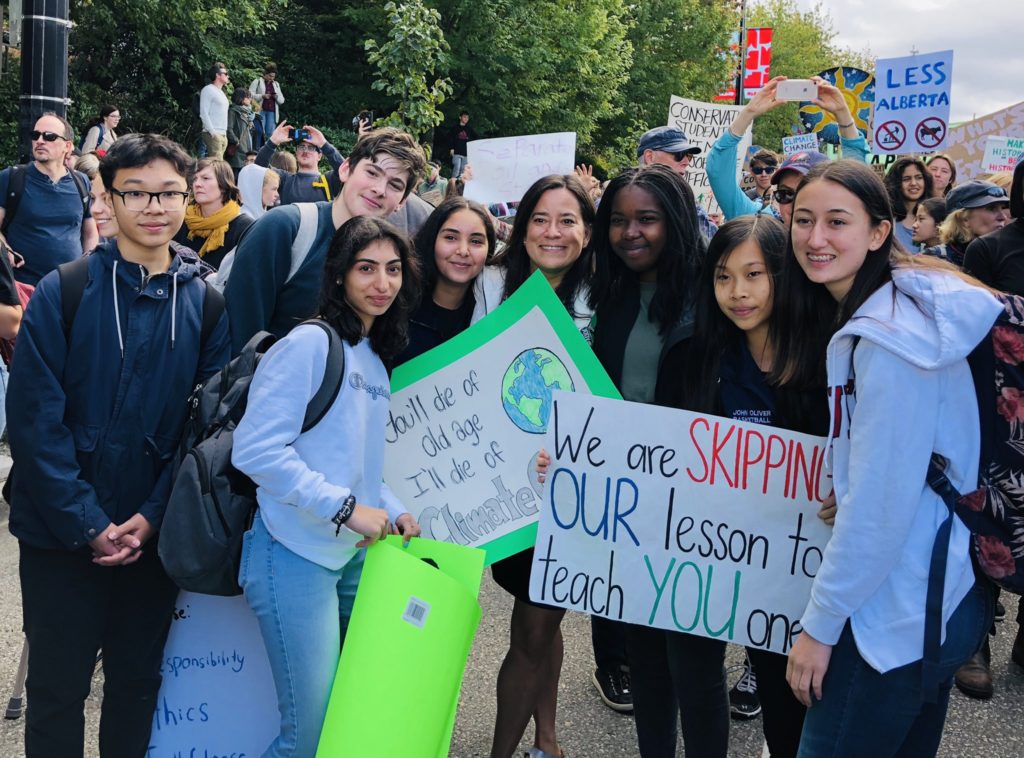 Ignore the forefront of this photo, in the background, you’ll see a “LESS ALBERTA” that made me laugh. 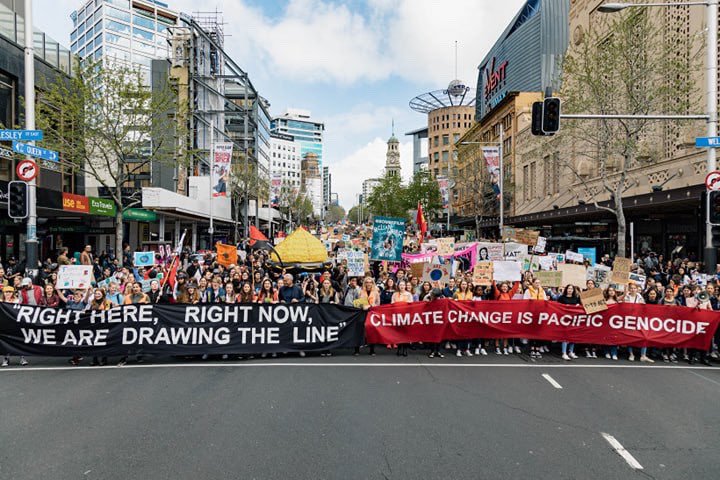 Also.. JUST “Pacific” genocide? What about Arctic? Atlantic? Indian? They have to mean the ocean and not the actual definition of “pacific” as in “peaceful”.. 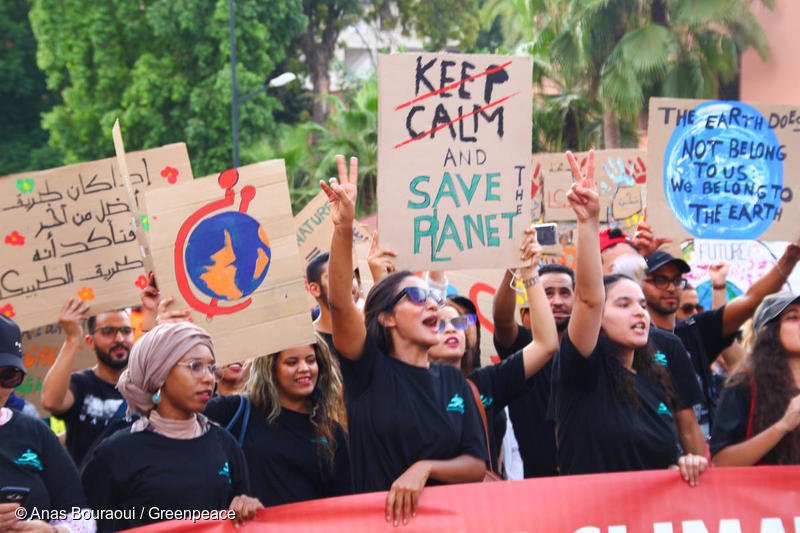 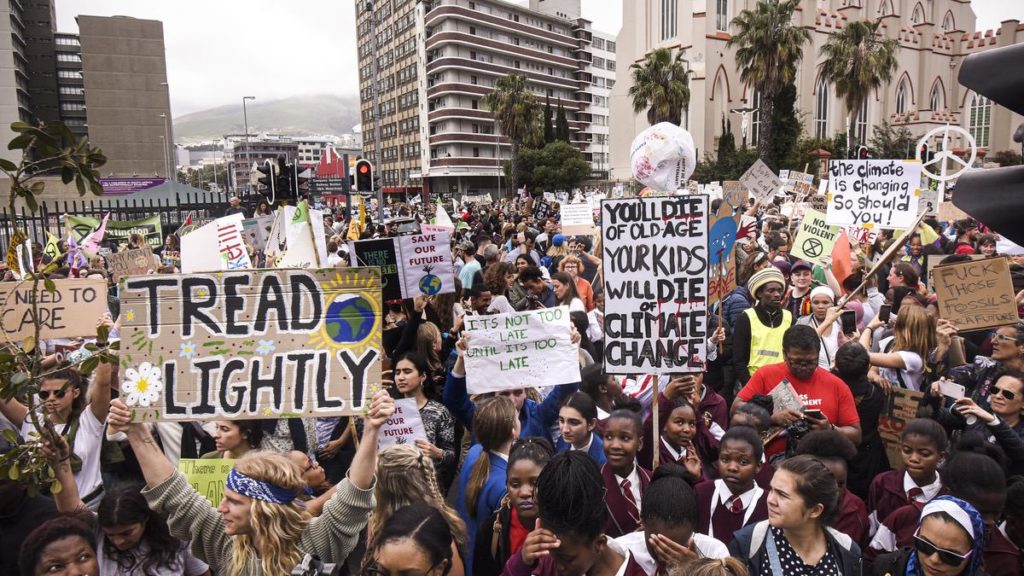 Go allllllll the way to the right and you’ll see a man holding a sign that says “FUCK THOSE FOSSILS FOR A FUTURE”. 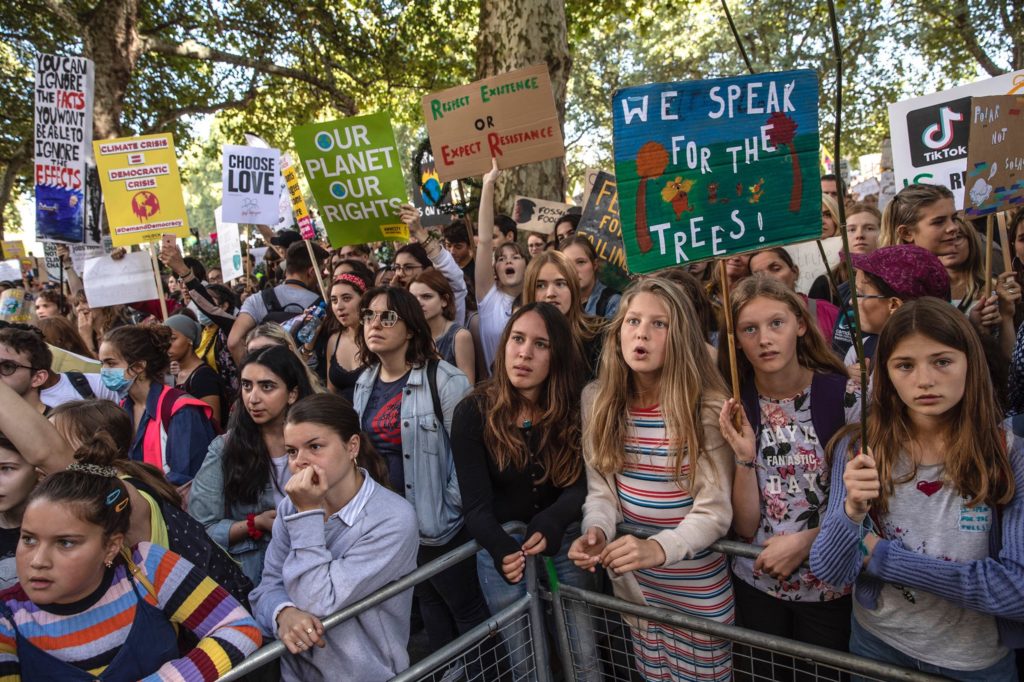 You do not get to call this “protesting”. You’re laying on the ground. Most of you don’t even have protest signs. 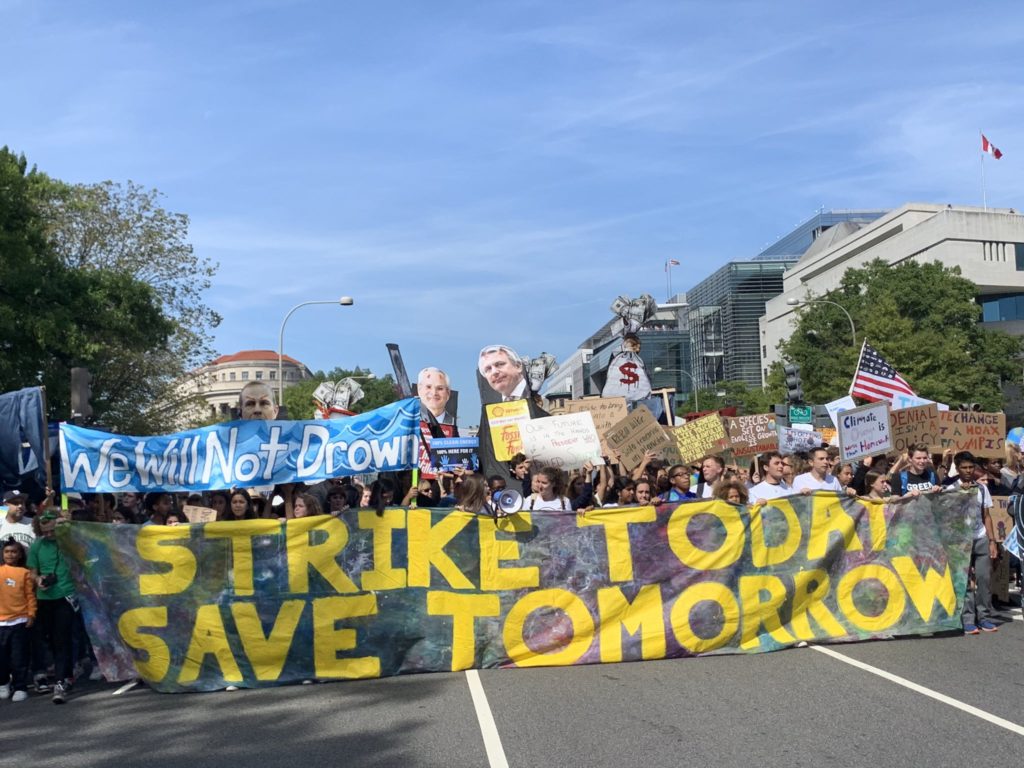 “Climate Change isn’t a hoax, Trump is” (far right) has to be my favorite one out of this bunch. 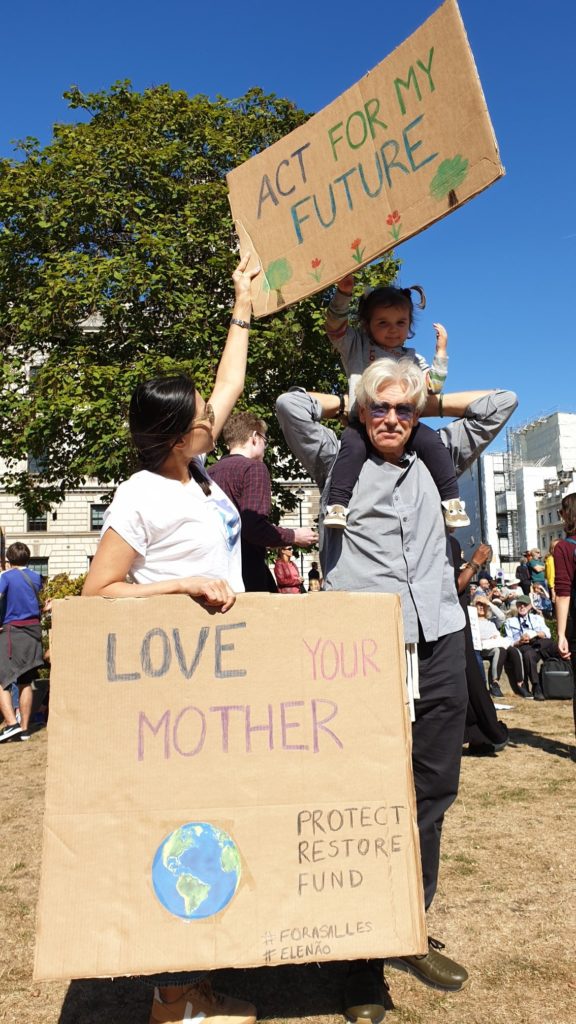 That child isn’t going to remember this, and she certainly doesn’t know why you want her to hold that sign, nor can she fathom what any of it means at her age; just another example of Democrats shoving their beliefs onto children before they’ve even had the chance to learn about the topic. 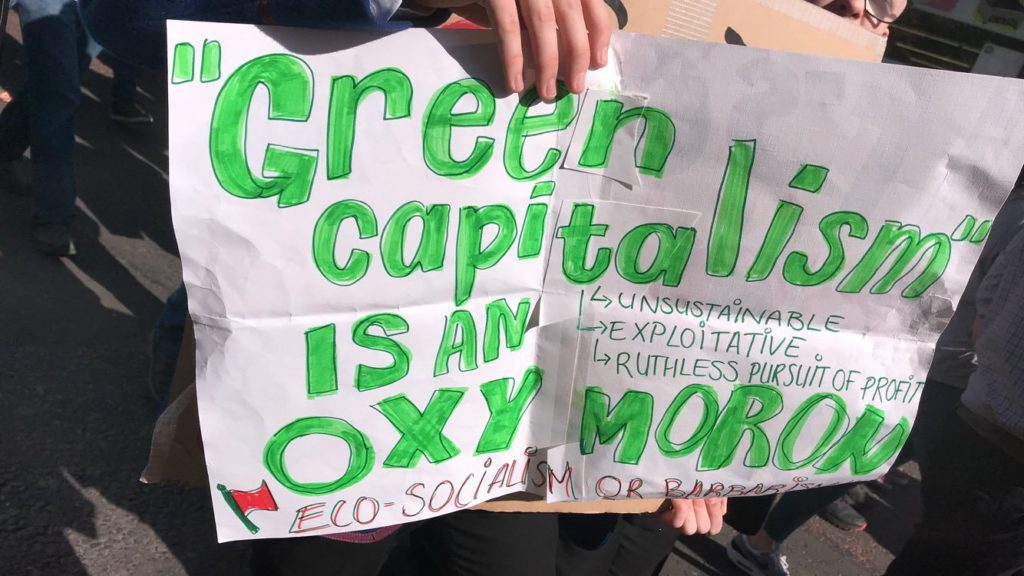 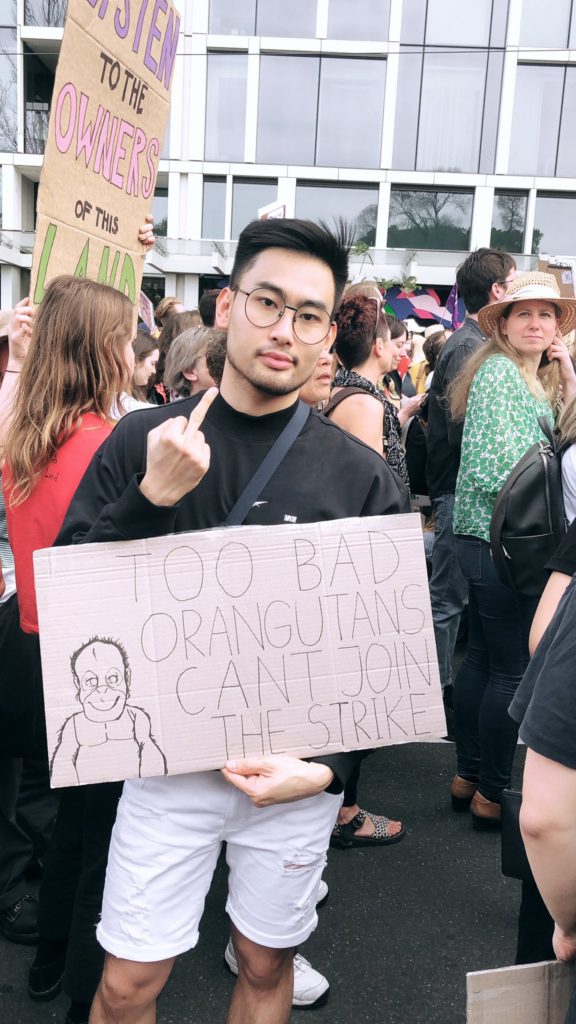 So, I guess this guy really wanted to bring his orangutan? 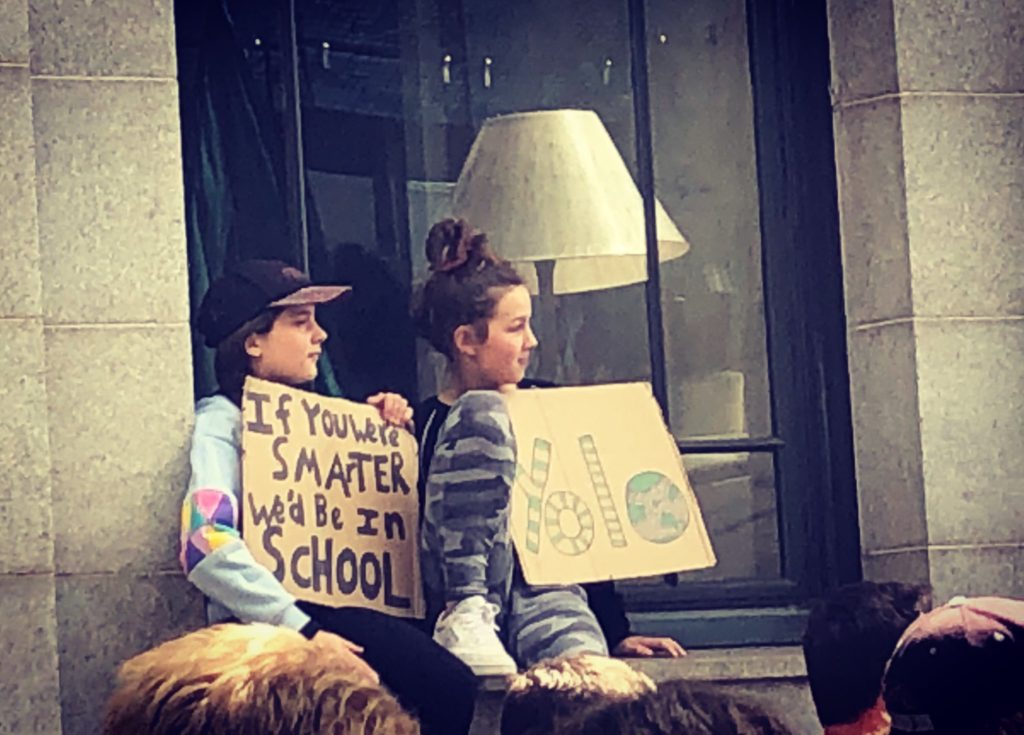 “If you were smarter we’d be in school” followed up by a “YOLO”? Burn. (Are people still saying YOLO?) 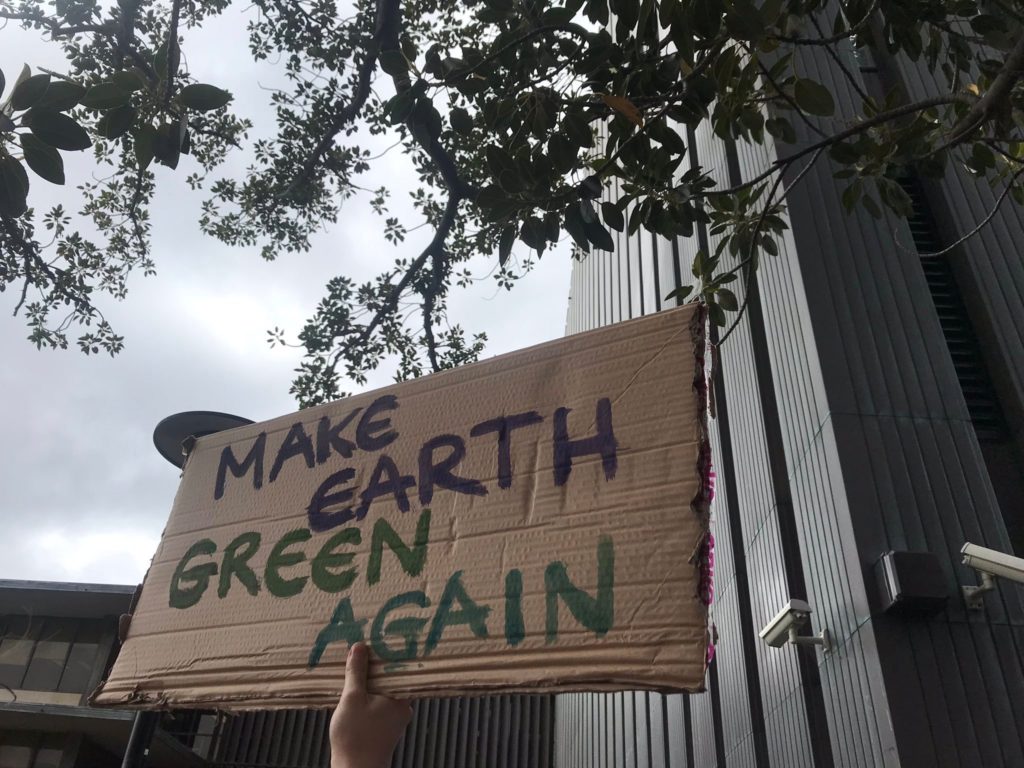 It’s roughly 70% blue and always has been but okay, go off..

On the far right, there’s a sign that says, “If you save your girlfriend”. That’s it. That’s the sign. 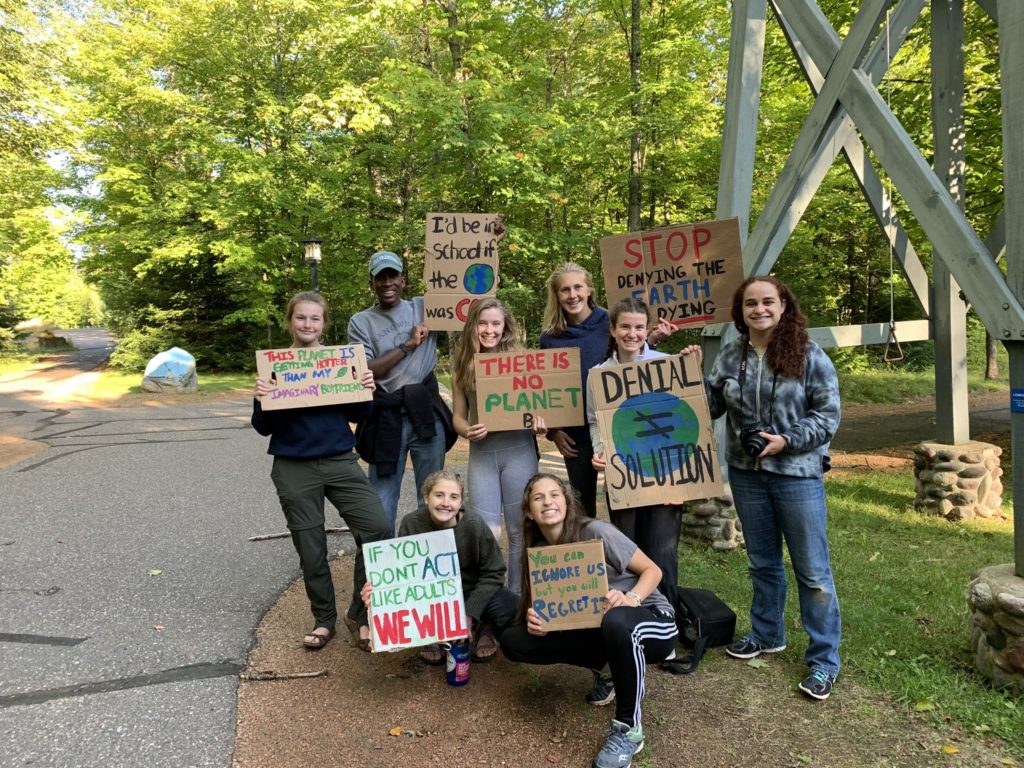 “This planet is getting hotter than my imaginary boyfriend” – that sounds like a personal problem.

In conclusion, GO BACK TO SCHOOL. You look like idiots and you’re all going to wind up as high school dropouts that say they’re “activists” and just do this kind of thing for a living except – these protests don’t really pay.