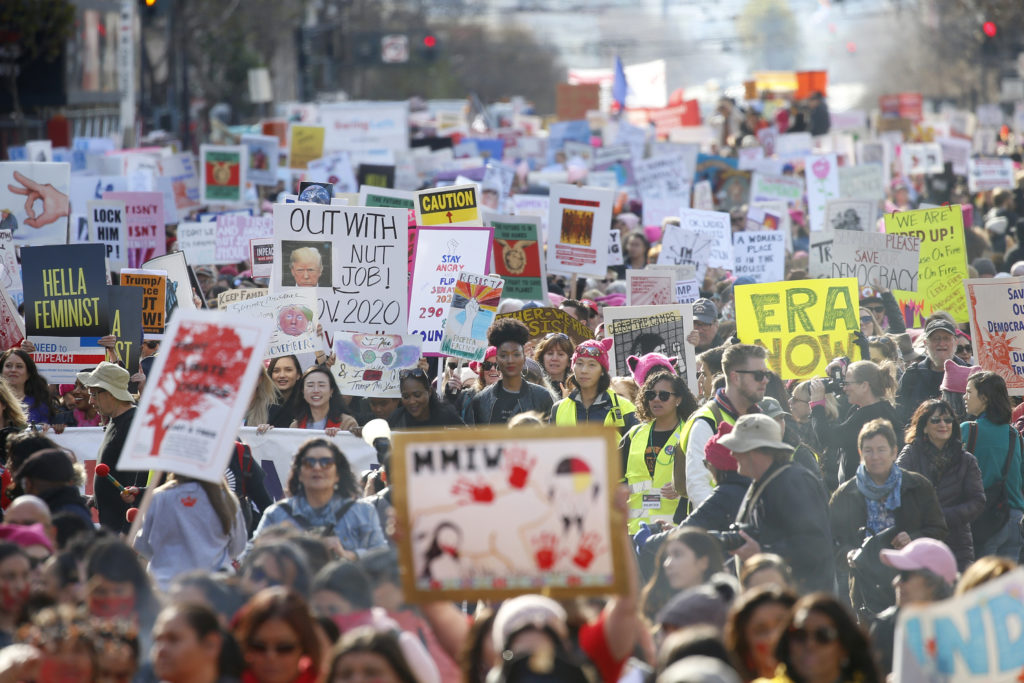 As you may know, thousands of feminists gathered in the major cities of America to take to the streets for the “Women’s March” on Saturday, 1/18/20, which I have never really understood WHY these women are marching. It’s the best time to be a woman in America. Women’s unemployment is at a 65 year low. 3.5 million employed since Trump’s election. 1.5 million have been lifted out of poverty.

I also REALLY don’t understand a Women’s March in 2020. If anything, we should be celebrating the 100 year anniversary of Women’s Suffrage.

However, libs will be libs. They will continue to spread hate, lies, and CNN talking points instead of celebrating ANYTHING. Of course, many of them believe this will be the last Women’s March because next year “Trump won’t be a problem anymore”. This is, obviously, because they believe that impeachment equals removal, when in fact, it does not.

What’s more confusing about this Women’s March is the fact that it wasn’t really about “women’s issues” – it was more about climate change, immigration, reproductive rights, and “I hate Trump”. 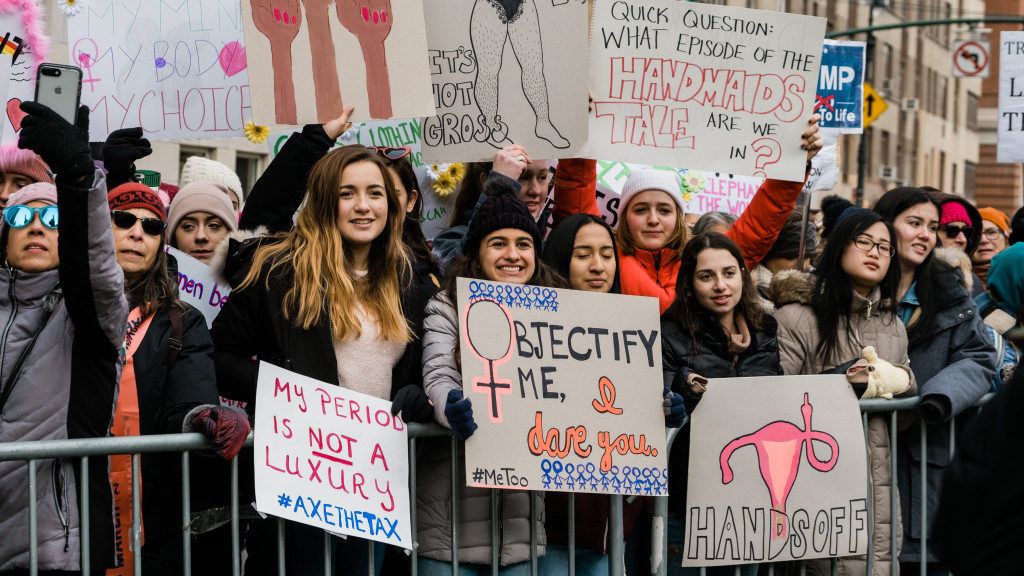 I don’t know why this girl on the left thinks ANYONE would think a period is a luxury – as if the government taxes things that are only a luxury? Also, the female reproductive system giving the finger is a nice touch, I suppose. 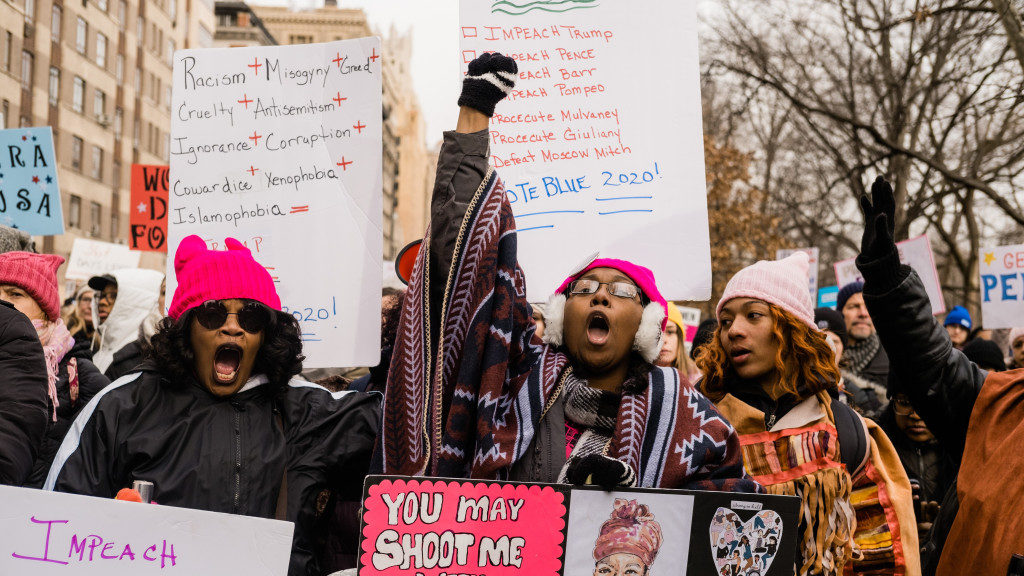 The cropping is important here. Maybe we should’ve gotten the next line that comes after “You may shoot me”? Also the sign on the right says “Impeach Trump, Impeach Pence, Impeach Barr, Impeach Pompeo, Procecute Mulvaney, Procecute Giuliany, Defeat Moscow Mitch”…there is so much ignorance on one sign. You can’t just impeach people anyone you want for no reason, despite what the Democrats have shown you over the past few weeks. “Procecute” is spelled “Prosecute”, “Giuliany” is spelled “Giuliani”, and “Moscow Mitch” just sounds like a tasty drink I’d order at a bar. 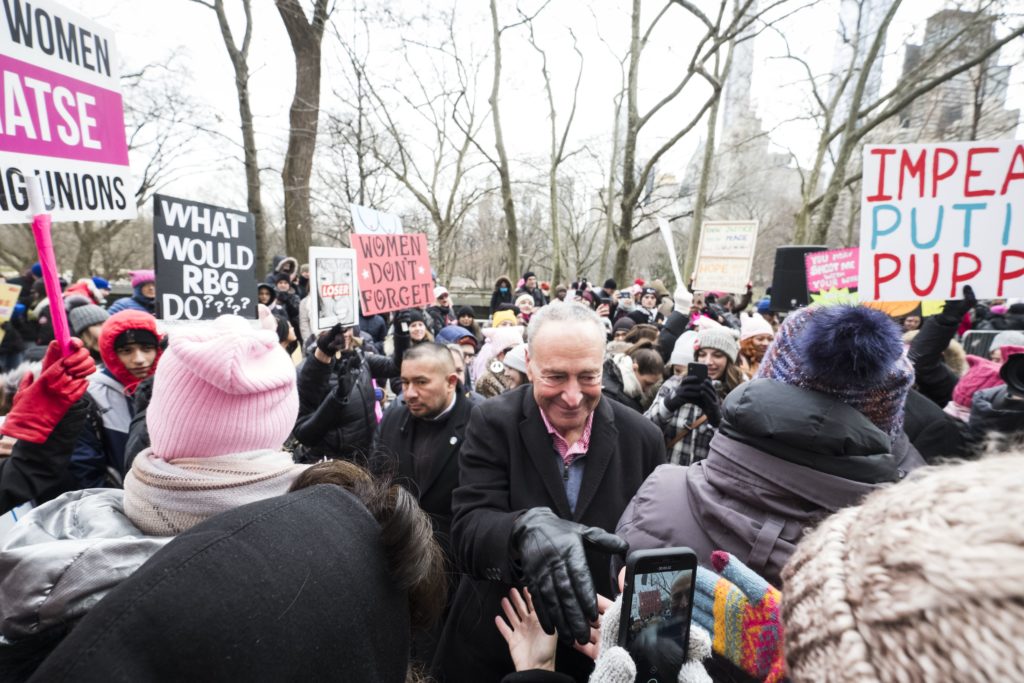 No sign here, just a creepy picture of Chuck Schumer. 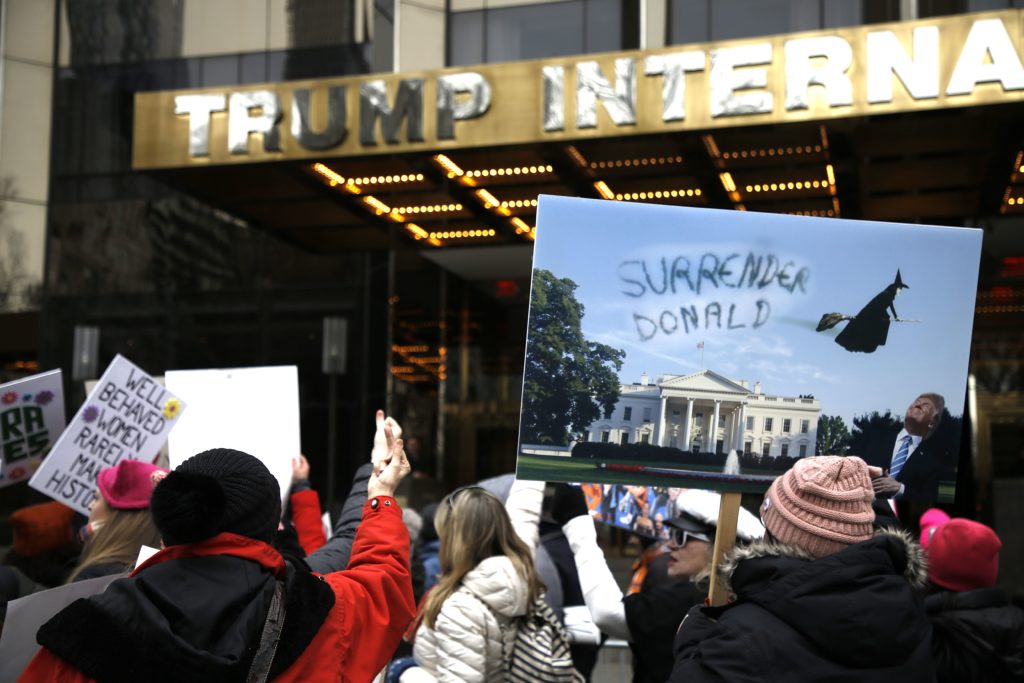 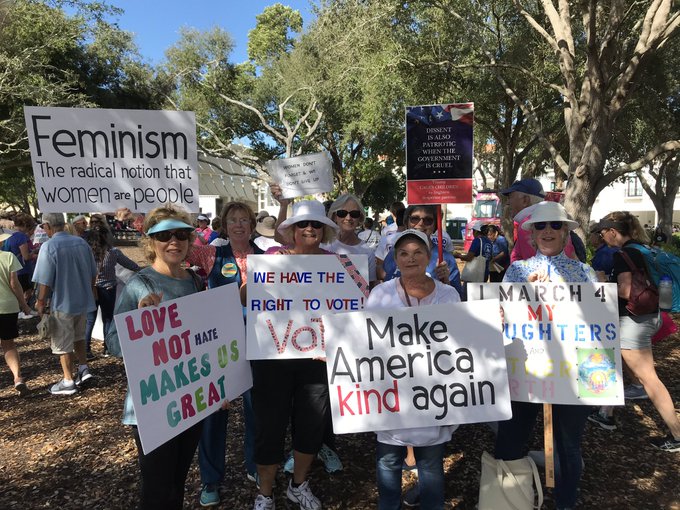 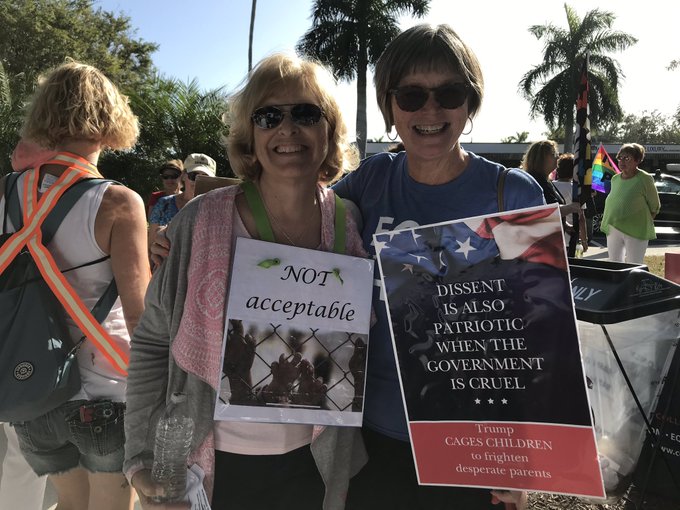 “Trump CAGES CHILDREN to frighten desperate parents” – Trump separates children whose DNA does not match the “parents” they’re crossing over with – which usually means that they are victims of human trafficking, and he’s actually saving their lives. Also, Obama created those cages – and NOT for the same reasons. 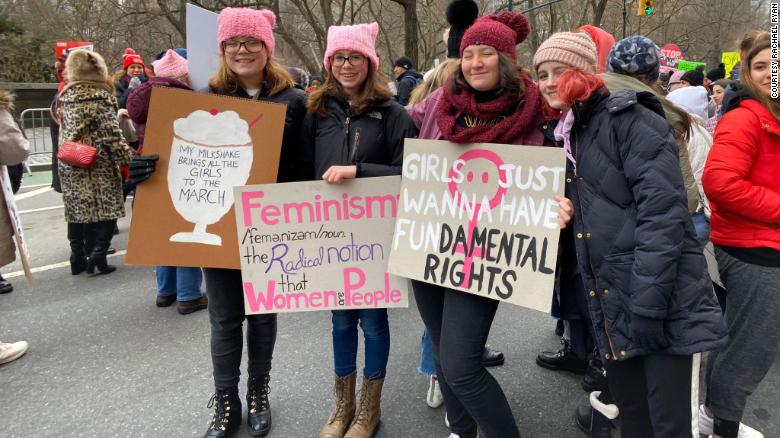 “My milkshake brings all the girls to the MARCH” – you are all very cold and I think the last thing needed here is a frozen drink. Also, how does a throwback Gwen Stefani song lyric have anything to do with ANYTHING? 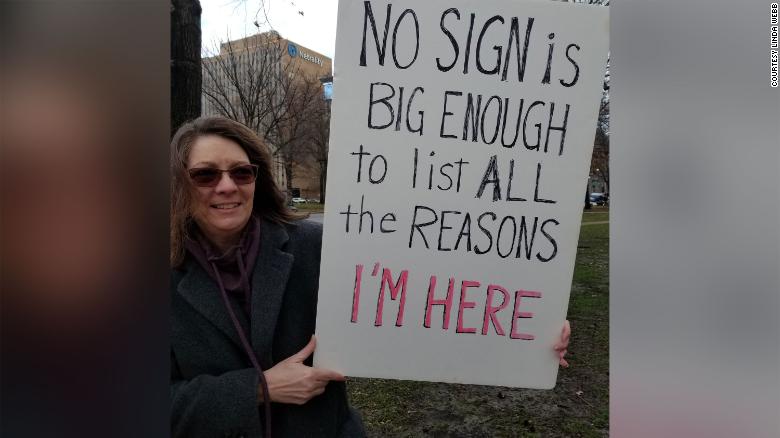 We all know I love a good ol’ generic sign that can be used for anything. 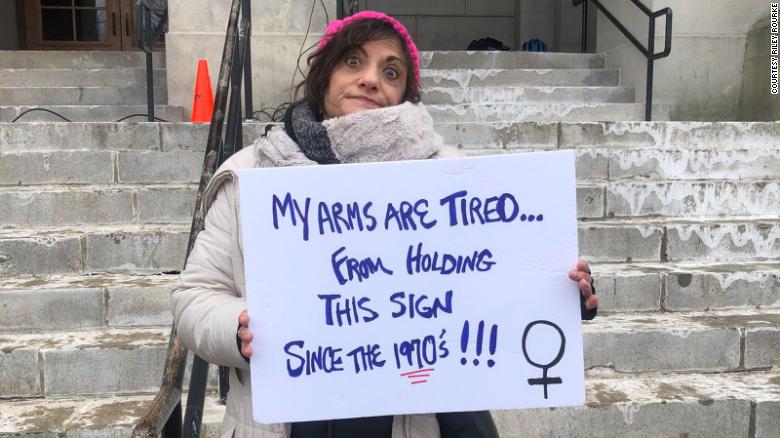 Is there a reason you look like you’re on drugs? Why have you been holding the sign since the 70’s? Are you aware of what year it is? Are you okay? 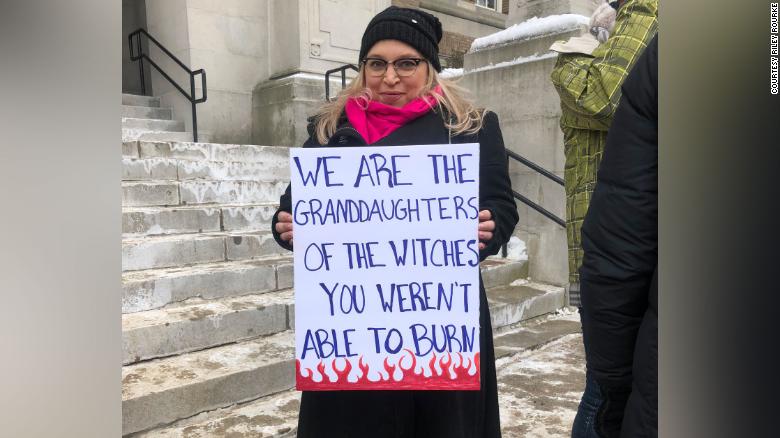 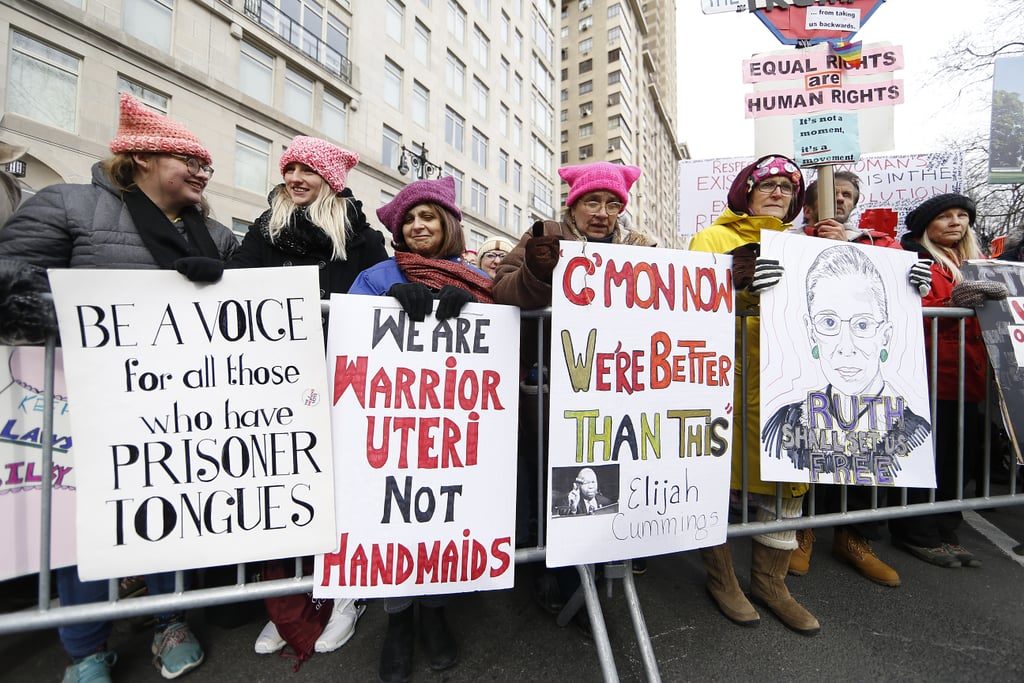 Firstly, I don’t know what a prisoner tongue is. I also don’t know what Warrior Uteri is, nor do I want to. Then idolization of a radical leftist, Elijah Cummings; and a woman who may not even be alive because no one has seen her in months – RBG. 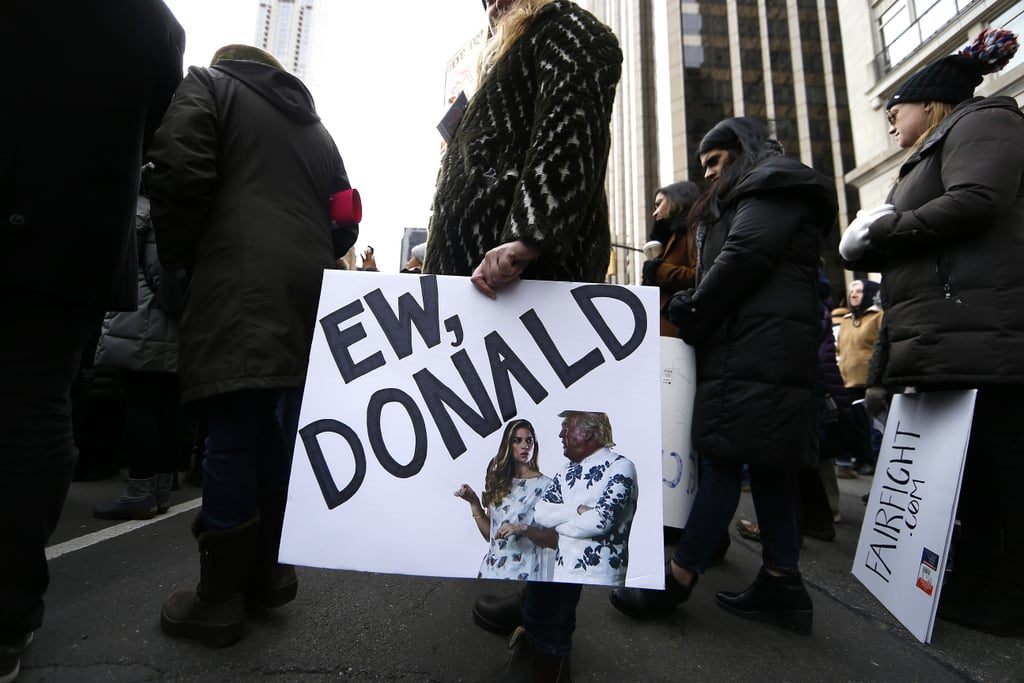 I appreciate the Schitt’s Creek reference because this show is FREAKING HILARIOUS. However, how would President Trump EVER fit David’s character definition? I’d say he’s much more of a Johnny Rose than a David Rose. IYKYK. 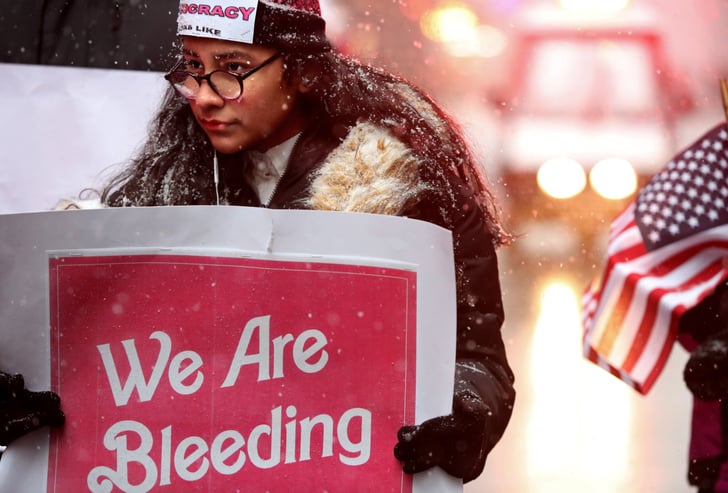 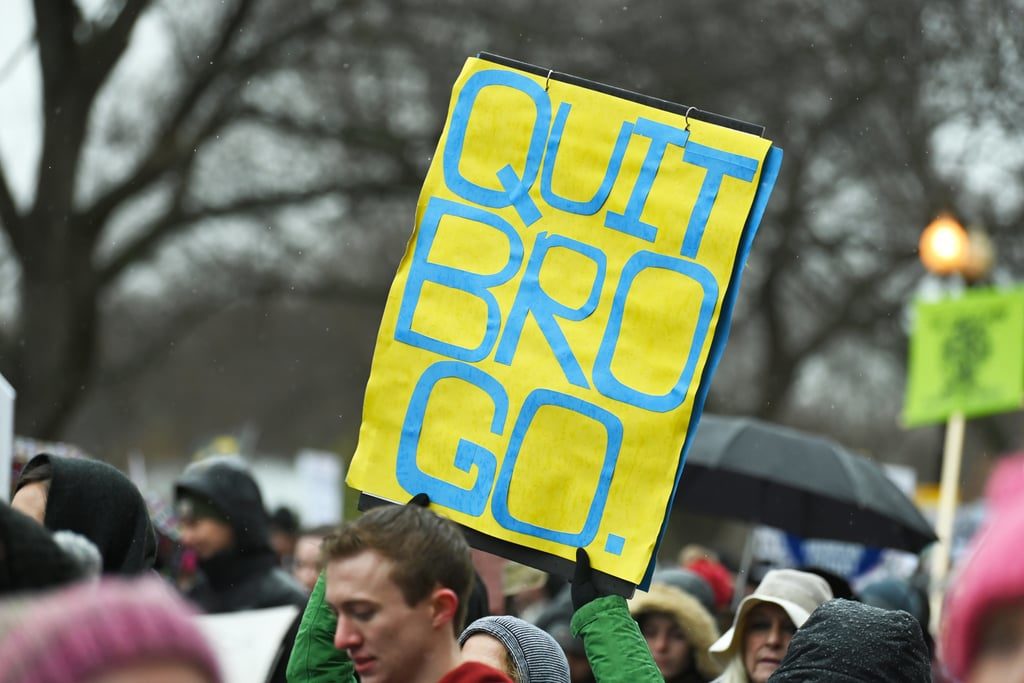 What does that even mean? 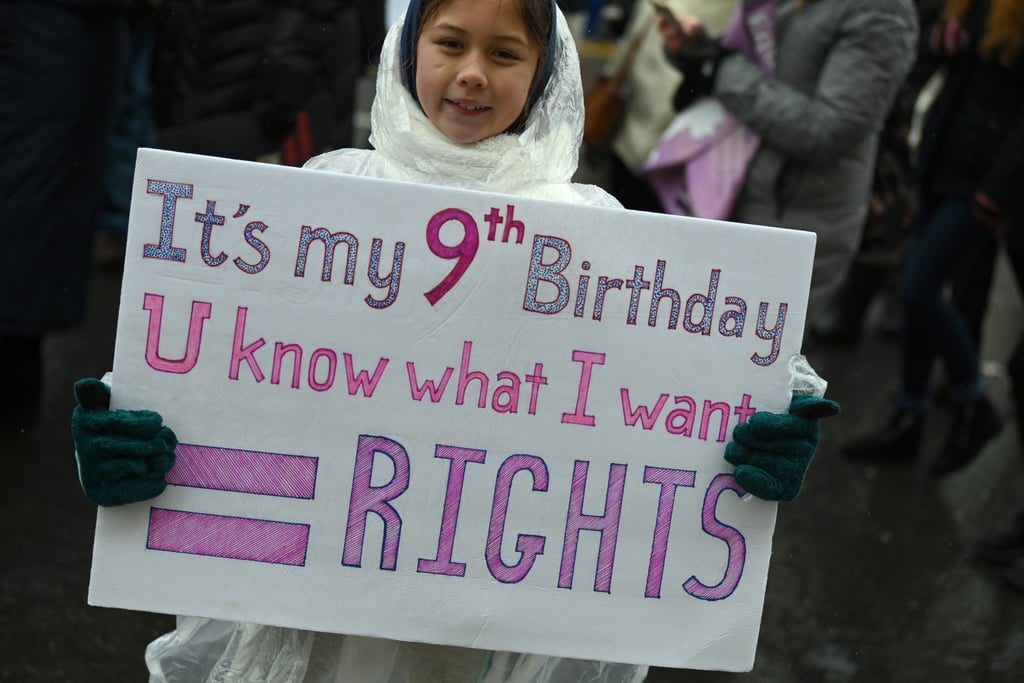 It’s your 9th birthday and your parents brought you out in the freezing cold to force their political agenda on you? Sounds like the BEST BIRTHDAY EVER. 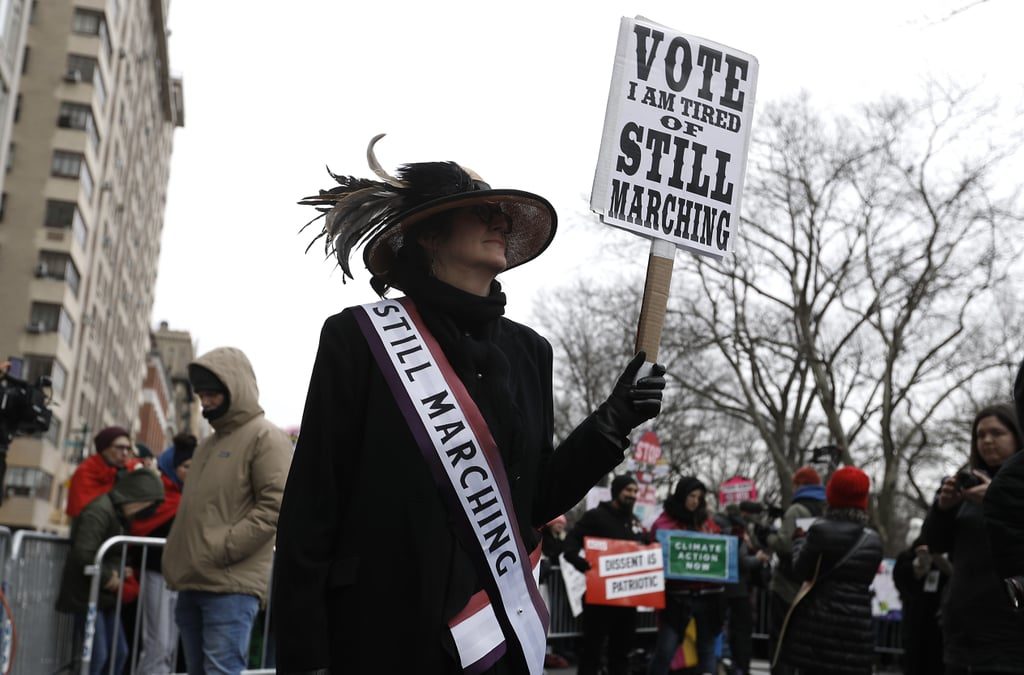 Why the witch-y look? Why the sash? Why the sign that says, “VOTE I am tired of still marching”? Why? 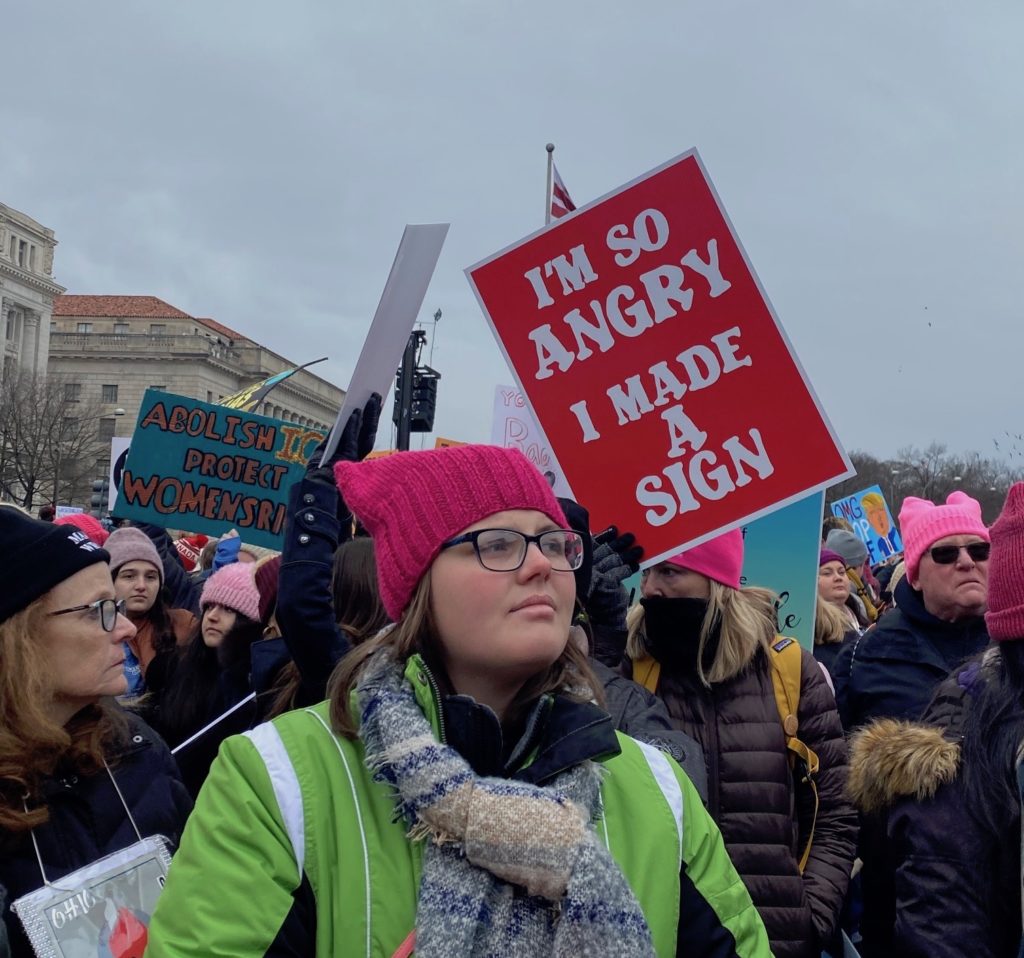 First, there’s a nice general sign that can be used for any event in the front. Secondly, in the back, it says “Abolish ICE, Protect Women’s Rights” and – last time I checked – those two things had nothing to do with each other. 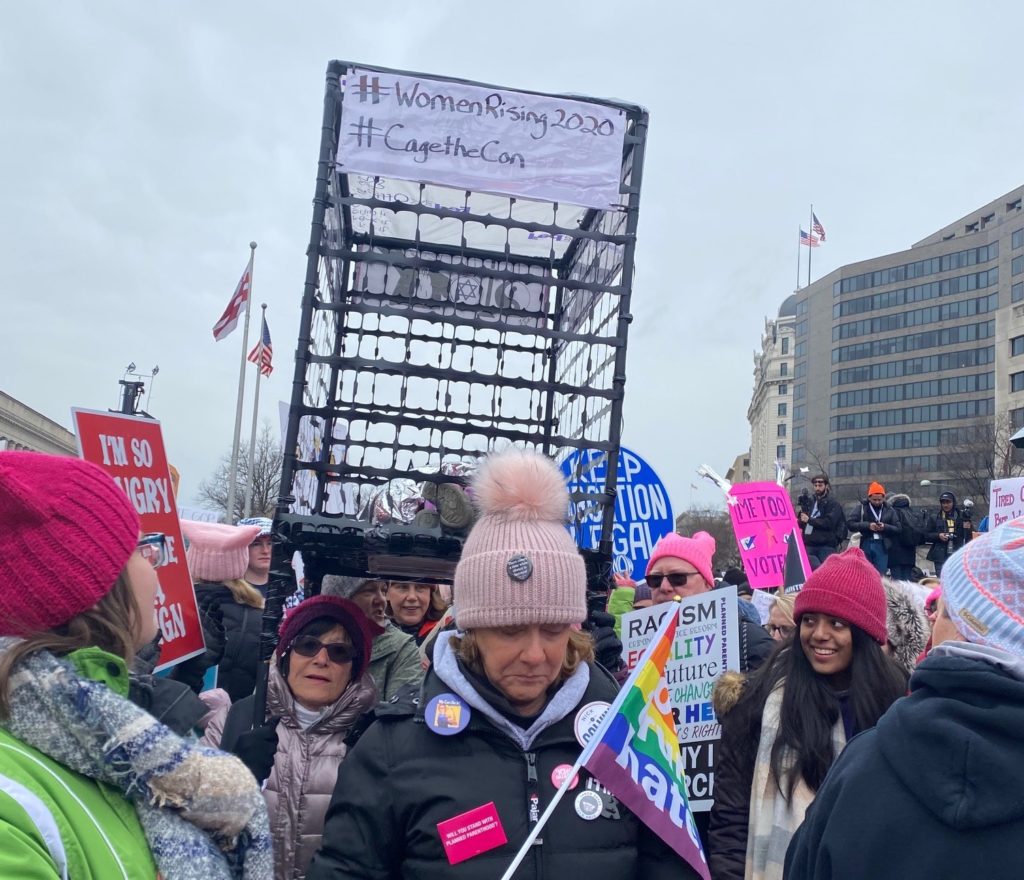 And here we have a pack of loony leftists literally carrying a cage around that says “#WomenRising2020 #CageTheCon”.

If I am not mistaken, I believe this person took a blow-up doll, put a Trump mask on it and a red tie, then dressed it up like Hannibal Lecter. If that doesn’t scream “deranged” to you, I don’t know what will. 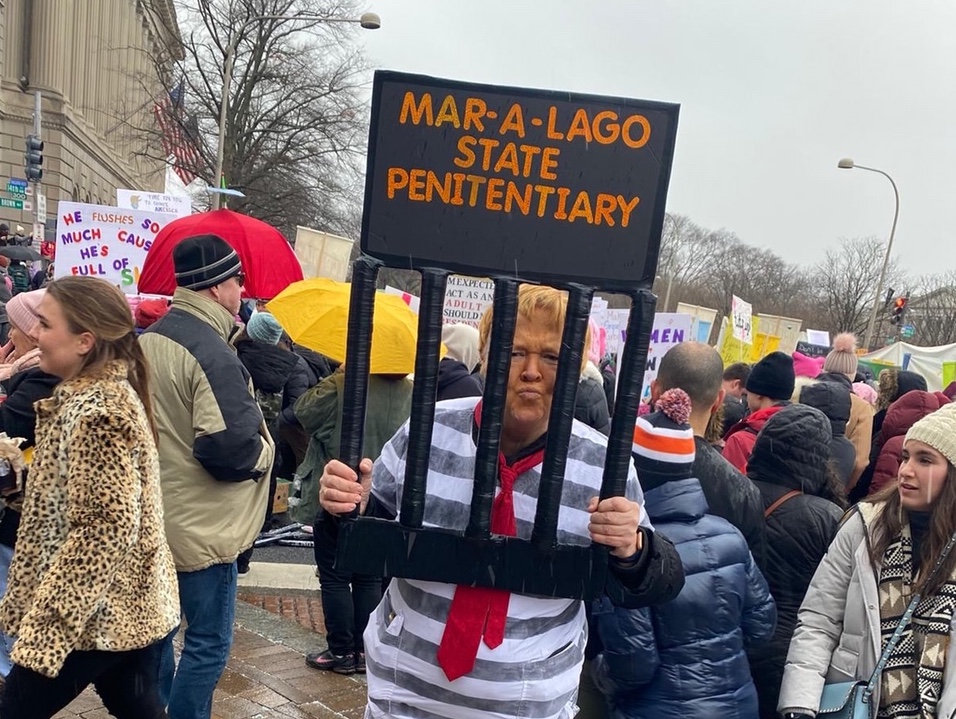 Here’s another loony leftist, carrying jail bars around, spray tanned to death, with some weird Kathy Bates haircut. They are dressed in a white and black striped outfit with a red tie. Their jail bars say, “Mar-A-Lago State Penitentiary” , which, once again, makes zero sense. 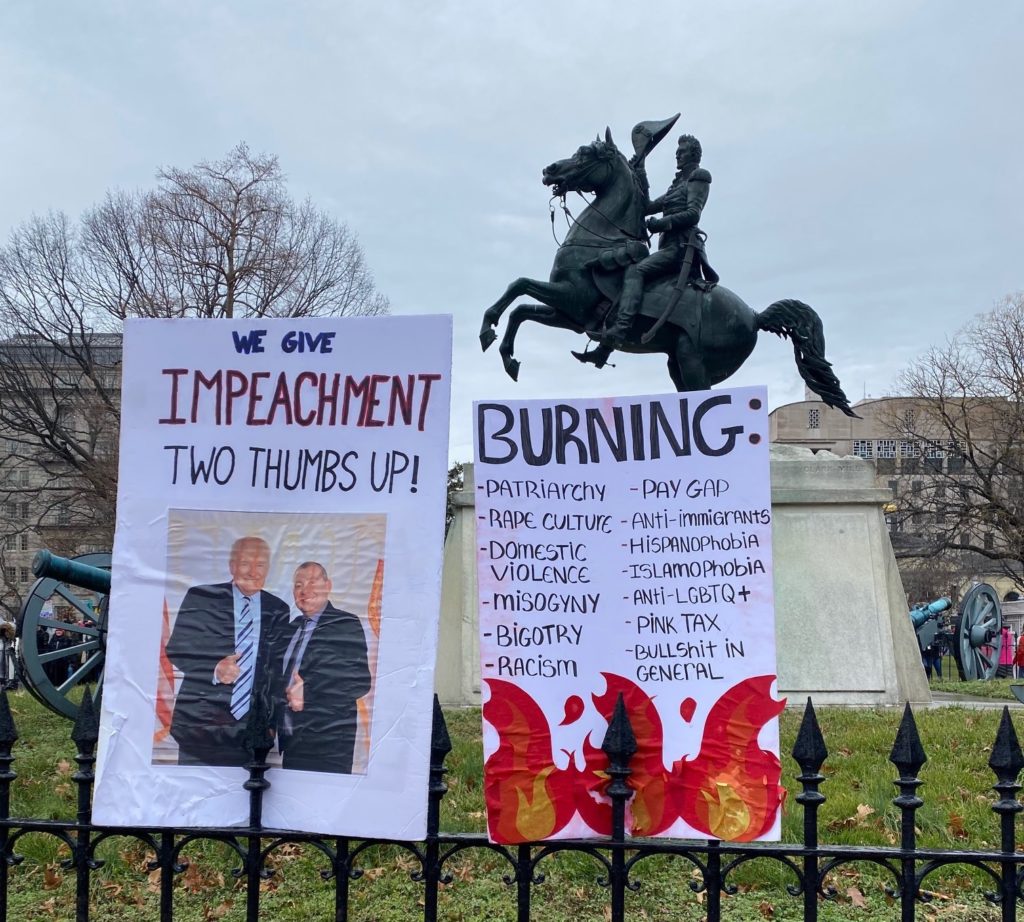 Patriarchy? Not a thing. Rape culture? Talk to Hollywood and Democrats about that. Domestic violence? Check the LGBT domestic violence statistics. Misogyny? The only misogyny I see is between women. Bigotry? Not respecting someone with different values is the Democrats game, not ours. Racism? Dems invented that. Pay gap? Okay. Anti-Immigrants? Anti-Illegal Immigrant maybe. Hispanophobia? Not a word. Islamophobia? It’s not a phobia if there’s something to fear. Anti-LGBT+? Trump is the first pro-LGBT President. Pink Tax? Yeah sorry ladies, we have to pay more for our FANCIER razors. Get over it. Bullshit in General? Yeah, there’s a lot of BS going on in Congress right now.

In conclusion, the “Women’s March” wasn’t really about women, was it? So, just another liberal march that made no sense.